WORKSHEET # 6 CAPACITANCE
1. A Parallel plate capacitor each with plate area A and separation ‘d’ is charged to a potential    difference V. The battery used to charge it is then disconnected. A dielectric slab of thickness d and dielectric constant K is now placed between the plates. What change if any, will take place in
(i) Charge on the plates
(ii) Electric field intensity between the plates,
(iii) Capacitance of the capacitor
Justify your answer in each case.
(Ansi)charge on the capacitor remains unchanged ii) electric field reduces to 1/K times iii) the capacitance increases)
2. A 2m insulating slab with a large aluminium sheet of area 1m2 on its top is fixed by a man outside his house one evening. Will he get an electric shock, if he touches the metal sheet next morning ?
ANS: Yes
3.Why the capacitance of a parallel plate capacitor increases, on introducing a dielectric medium between the plates?
ANS:As E decreases, V decreases, therefore C increases)
4. A parallel plate capacitor with air between the plates charged. A dielectric is inserted between the plates. What will happen to its electrostatics potential? Give reasons.
ANS:  Q = constant ,C increases , V decrease.
5. The graph shoes the variation of voltage V across the plates of two capacitors A and B versus increase of charge Q stored on them. Which of the capacitors has higher capacitance? Give reason for your answer.
ANS: VA  VB ,therefore CA CB
6.  How does the energy stored in a capacitor change if after disconnecting the battery, the plates of a charged capacitor are moved farther ?
ANS: Increases
7. How does the energy stored in a capacitor change If the plates of a charged capacitor are moved farther, the battery remaining connected?
ANS: Decreases 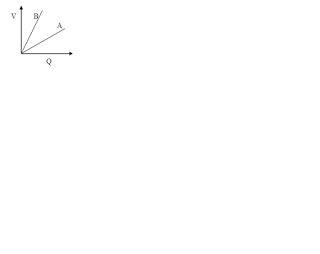 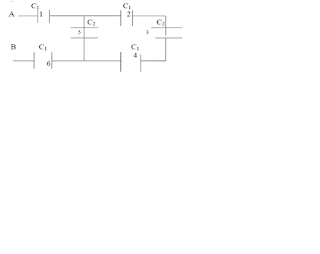 ANS: C = 60/61 PF
13. A parallel plate capacitor of capacitance C is charged to a potential V .It is then connected to another capacitor having the same capacitance. Find out the ratio of the energy stored in the combined system to that stored initially in the single capacitor?
ANS: ratio is ½

14.  A technician has only two capacitor. By using them in series or parallel, he is able to obtain the capacitance of 4, 5, 20, 25 μF .What is the capacitance of both capacitor?
ANS: 5µF and 20µF
15. Net capacitance of three identical capacitors in series is 1 μF. What will be their net capacitance, if connected in parallel? Find the ratio of energy stored in the two configurations, if they are both connected to the same source ?
ANS: ratio is 1/9
16. Three capacitor of capacitance 2 pF,3pF and 4pF and connected in parallel.
(i) What is the total capacitance of the combination?
(ii) Determine the charge on each capacitor, if the combination is connected to a 100V supply
ANS: i)9PF,ii) 200pc,300pc,400pc
17. A 4μF capacitor is charged by a 200V supply. Then, it is disconnected from the supply and is connected to another uncharged 2μF capacitor. How much electrostatic energy of the first capacitor is lost in the form of heat and electromagnetic radiation?
ANS: 2.67 X 10 -2 J