1.       When an object is placed between f and 2f of a concave mirror, would the image formed be (i) real or virtual and (ii) diminished or magnified ?
2.       Draw a plot showing the variation of de Broglie wavelength of electron as a function of its K. E.
3.       Why is the frequency of outgoing and incoming signals different in a mobile phone ?
4.       A particle of mass ‘m’ and charge ‘q’ moving with velocity ‘v’ enters the region of uniform magnetic field at right angle to the direction of its motion. How does its kinetic energy get affected ?
5.       Figure shows a current carrying solenoid moving towards a conducting loop. Find the direction of the current induced in the loop.

6.       Distinguish between unpolarised and a linearly polarised light. Describe, with the  help of a diagram, how unpolarised light gets linearly polarised by scattering
7.        Why does white light disperse when passed through a glass prism ? Using lens maker’s formula, show how the focal length of a given lens  depends upon the colour of light incident on it.
8.        Using the graph shown in the figure for stopping potential V/s the incident Frequency of photons, calculate Planck’s constant. 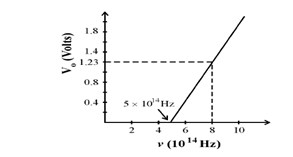 OR
If both the number of protons and neutrons in a nuclear reaction is conserved, in  what way is mass converted into
energy (or vice verse) ? Explain giving one example.
10. Using the concept of drift velocity of charge carriers in a conductor, deduce the relationship between current density and resistivity of the conductor.
11. Define the following using suitable diagrams : (i) magnetic declination and (ii) angle of dip. In what direction will  compass needle point when kept at the (i) poles and (ii)equator ?
12. Derive the expression for the magnetic energy stored in a solenoid in terms of magnetic field B, area A and length l  of the solenoid carrying a steady current I.How does this magnetic energy per unit volume compare with the  electrostatic Energy density stored in a parallel plate capacitor ?
13. A circuit containing an 80 mH inductor and a 250 µF capacitor in series connecte  to a 240 V, 100 rad/s supply. The  resistance of the circuit is negligible.(i) Obtain rms value of current.(ii) What is the total average power consumed by  the circuit ?
14. Answer the following questions :
(i) Why is the thin ozone layer on top of the stratosphere crucial for human survival ? Identify to which a part of electromagnetic spectrum does this radiation belong and write one important application of the radiation.
(ii) Why are infrared waves referred to as heat waves ? How are they produced ?
What role do they play in maintaining the earth’s warmth through the greenhouse effect ?
15. Define the term ‘critical angle’ for a pair of media.
A point source of monochromatic light ‘S’ is kept at the centre of the bottom of a cylinder of radius 15.0 cm. The cylinder  contains water (refractive index 4/3) to a height of 7.0 cm. Draw the ray diagram and calculate the area of water surface  through which the light emerges in air.
16. Which two of the following lenses L1, L2 and L3 will you select as objective and  eyepiece for constructing best possible
(i) telescope (ii) microscope ? Give reason to support your answer.

17. Explain by drawing a suitable diagram that the interference pattern in a double slit is actually a superposition of single
slit diffraction from each slit. Write two basic features which distinguish the interference pattern from those seen in
a coherently illuminated single slit.
18. Distinguish between n-type and p-type semi-conductors on the basis of energy band diagrams. Compare their
conductivities at absolute zero temperature and at room  temperature.
19. (a) Given a block diagram of a generalized communication system.

Identify the boxes ‘X’ and ‘Y’ and write their functions.
(b) Distinguish between “Point to Point” and “Broadcast” modes of communication
20. An electric dipole of dipole moment

is placed in a uniform electric field

.Obtainthe expression for the torque

experienced by the dipole. Identify two pairs of perpendicular vectors in the expression.

21. (a) Two spherical conductors of radii R1 and R2 (R2 > R1) are charged. If they are connected by a conducting wire, find
out the ratio of the surface charge densities on them.
(b) A steady current flows in a metallic conductor of non-uniform cross-section.  Which of these quantities is constant
along the conductor : current, current density, electric field, drift speed ?
22. In the two electric circuits shown in the figure, determine the readings of ideal ammeter (A) and the ideal voltmeter (V).

OR
In the circuit shown in the figure, find the current through each resistor. 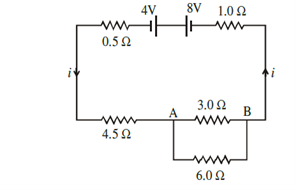 23. Ameen had been getting huge electricity bill for the past few months. He was upset about this. One day his friend Rohit, an electrical engineer by profession, visited hishouse. When he pointed out his anxiety about this to Rohit, his friend found that Ameen was using traditional incandescent lamps and using old fashioned air conditioner. In addition there was no proper earthing in the house. Rohit advised him to use CFL bulbs of 28 W instead of 1000 W – 220 V and also advised him to get proper earthing in the house. He made some useful suggestion and asked him to spread this message to his friends also.
(i) What qualities/values, in your opinion did Rohit possess ?
(ii) Why CFLs and LEDs are better than traditional incandescent lamps ?
(iii) In what way earthing reduces electricity bill ?

24. (a) Draw a schematic arrangement of Geiger-Marsden experiment showing the scattering of a-particles by a thin foil of  gold. Why is it that most of the a-particles go right through the foil and only a small fraction gets scattered at   large angles ?
Draw the trajectory of the a-particle in the coulomb field of a nucleus. What is the significance of impact parameter and what information can be obtained regarding the size of the nucleus ?
(b) Estimate the distance of closest approach to the nucleus (Z = 80) if a 7.7 MeV a-particle before it comes momentarily to rest and reverses its direction.
OR
(a) Write two important limitations of Rutherford model which could not explain the observed features of atomic spectra.
How were these explained in Bohr’s model of hydrogen atom ? Use the Rydberg formula to calculate the wavelength
of the Hα line.  (Take R = 1.1 X107 m–1).
(b) Using Bohr’s postulates, obtain the expression for the radius of the nth orbit in hydrogen atom.
25. (a) Figure shows the input waveform which is converted by a device ‘X’ into an  output waveform. Name the device and  explain its working using the proper  circuit. Derive the expression for its voltage gain and power gain.

(b) Draw the transfer characteristic of a base biased transistor in CE configuration.Explain clearly which region of the curve
is used in an amplifier.
OR
(a) Explain briefly, with the help of circuit diagram, the working of a full wave rectifier. Draw its input and output waveforms.
(b) Identify the logic gate equivalent to the circuit shown in the figure.Draw the truth table for all possible values of inputs A and B.

26. (a) Use Biot-Savart law to derive the expression for the magnetic field due to a circular coil of radius R having N turns at  a point on the axis at a distance ‘x’  from its centre. Draw the magnetic field lines due to this coil.
b) A current ‘I’ enters a uniform circular loop of radius ‘R’ at point M and flows out at N as shown in the figure.Obtain the net magnetic field at the centre of the loop.

(a) Show how Biot-Savart law can be alternatively expressed in the form of Ampere’s   circuital law. Use this law to obtain the expression for the magnetic field inside a  solenoid of length ‘l’, cross-sectional area ‘A’ having ‘N’ closely wound  turn and   carrying a steady current ‘I’. Draw the magnetic field lines of a finite solenoid carrying   current I.
(b) A straight horizontal conducting rod of length 0.45 m and mass 60 g is  suspended by two vertical wires at its ends. A   current of 5.0 A is set up in the rod through the wires.Find the magnitude and direction of the magnetic field which  should be set up in order that the tension in the wire is zero.
Posted by examphysics at 00:41:00